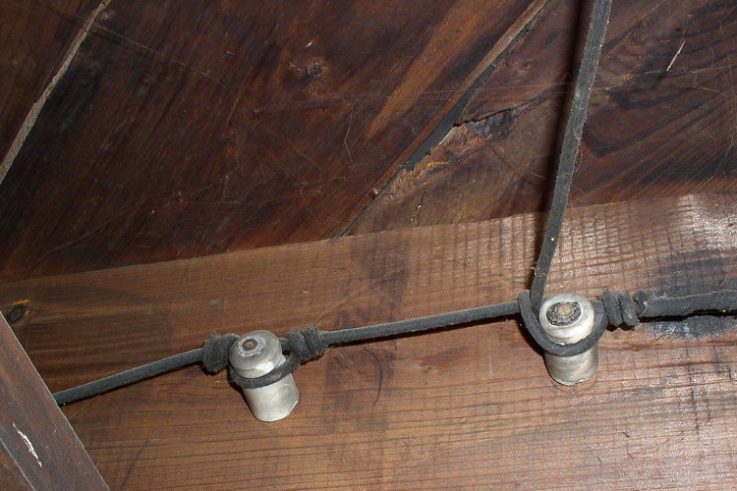 Knob-and-tube wiring is an early standardized method of electrical wiring in buildings, in common use in North America from about 1880 to the early 1940s. It consisted of single-insulated copper conductors run within wall or ceiling cavities, passing through joist and stud drill-holes via protective porcelain insulating tubes, and supported along their length on nailed-down porcelain knob insulators. Where conductors entered a wiring device such as a lamp or switch, or were pulled into a wall, they were protected by flexible cloth insulating sleeve called loom. The first insulation was asphalt-saturated cotton cloth, then rubber became common. Wire splices in such installations were twisted together for good mechanical strength, then soldered and wrapped with rubber insulating tape and friction tape (asphalt saturated cloth), or made inside metal junction boxes.

Knob and tube wiring was eventually displaced from interior wiring systems because of the high cost of installation compared with use of power cables, which combined both power conductors of a circuit in one run (and which later included grounding conductors).

At present, new knob and tube installations are permitted in the U.S. only in a few very specific situations listed in the National Electrical Code, such as certain industrial and agricultural environments.

Ceramic knobs were cylindrical and generally nailed directly into the wall studs or floor joists. Most had a circular groove running around their circumference, although some were constructed in two pieces with pass-through grooves on each side of the nail in the middle. A leather washer often cushioned the ceramic, to reduce breakage during installation.

By wrapping electrical wires around the knob, and securing them with tie wires, the knob could be used to securely and permanently anchor the wire. The knobs separated the wire from potentially combustible framework, facilitated changes in direction, and ensured that wires were not subject to excessive tension. Because the wires were suspended in air, they could dissipate heat well.

Ceramic tubes were inserted into holes bored in wall studs or floor joists, and the wires were directed through them. This kept the wires from coming into contact with the wood framing members and from being compressed by the wood as the house settled. Ceramic tubes were sometimes also used when wires crossed over each other, for protection in case the upper wire were to break and fall on the lower conductor.

Ceramic cleats, which were block-shaped pieces, served a purpose similar to that of the knobs. Not all knob and tube installations utilized cleats. Ceramic bushings protected each wire entering a metal device box, when such an enclosure was used.

Loom, a woven flexible insulating sleeve, was slipped over insulated wire to provide additional protection whenever a wire passed over or under another wire, when a wire entered a metal device enclosure, and in other situations prescribed by code.

Other ceramic pieces would typically be used as a junction point between the wiring system proper, and the more flexible cloth-clad wiring found in light fixtures or other permanent, hard-wired devices. When a generic power outlet was desired, the wiring could run directly into the junction box through a tube of protective loom and a ceramic bushing.

Wiring devices such as light switches, receptacle outlets, and lamp sockets were either surface-mounted, suspended, or flush-mounted within walls and ceilings. Only in the last case were metal boxes always used to enclose the wiring and device.

In the early 1900s, K&T wiring was less expensive to install than other wiring methods. For several decades, electricians could choose between K&T wiring, conduit, armored cable, and metal junction boxes. The conduit methods were known to be of better quality, but cost significantly more than K&T. In 1909, flexible armored cable cost about twice as much as K&T, and conduit cost about three times the price of K&T. Knob and tube wiring persisted since it allowed owners to wire a building for electricity at lower cost.

Modern wiring methods assume two or more load-carrying conductors will lie very near each other, as for instance in standard NM-2 cable. When installed correctly, the K&T wires are held away from the structural materials by ceramic insulators.

In short, K&T wiring that was installed correctly, and not damaged or incorrectly modified since then, is fairly safe when used within the original current-carrying limits, about ten amps per circuit.

Over time, the price of electrician labor grew faster than the cost of materials. This removed the price advantage of K&T methods, especially since they required time-consuming skillful soldering of in-line splices and junctions, and careful hand-wrapping of connections in layers of insulating tape.

Knob-and-tube wiring can be made with high current carrying capacity. However, most existing residential knob-and-tube installations, dating to before 1940, have fewer branch circuits than is desired today. While these installations were adequate for the electrical loads at the time of installation, modern households use a range and intensity of electrical equipment unforeseen at the time. Household power use increased dramatically following World War II, due to the wide availability of new electrical appliances and devices.

Modern home buyers often find that existing K&T systems lack the capacity for today’s levels of power use. First-generation wiring systems became susceptible to abuse by homeowners who would replace blown fuses with fuses rated for higher current. This over-fusing of the circuits subjects wiring to higher levels of current and risks heat damage or fire.

Currently, the United States National Electrical Code forbids the use of loose, blown-in, or expanding foam insulation over K&T wiring. This is because K&T is designed to let heat dissipate to the surrounding air. As a result, energy efficiency upgrades that involve insulating previously un-insulated walls usually also require replacement of the wiring in affected homes. However, California, Washington, Nebraska, and Oregon have modified the NEC to conditionally allow insulation around K&T. They did not find a single fire that was attributed to K&T, and permit insulation provided the home first passes inspection by an electrician.

Do you need help with electrical services?

Contact us – our electricians are always ready to help you solve any electrical issue.

As existing K&T wiring gets older, insurance companies may deny coverage due to a perception of increased risk. Several companies will not write new homeowners policies at all unless all K&T wiring is replaced, or an electrician certifies that the wiring is in good condition. Also, many institutional lenders are unwilling to finance a home with the relatively low-capacity service typical of K&T wiring, unless the electrical service is upgraded. Partial upgrades, where low demand lighting circuits are left intact, may be acceptable to some insurers.

Old and outdated wiring is not only inefficient, but dangerous. Schedule one of your licensed electricians to inspect your home to identify areas your can take advantage of to improve electrical efficiency.

Making the right investments in your home can lead to saving thousands of dollars in the long run. Before the thermometer starts to drop this season, review your energy consumption habits and areas in the home that can be improved. For a home electrical inspection contact D.O.C. Electrical Services today.