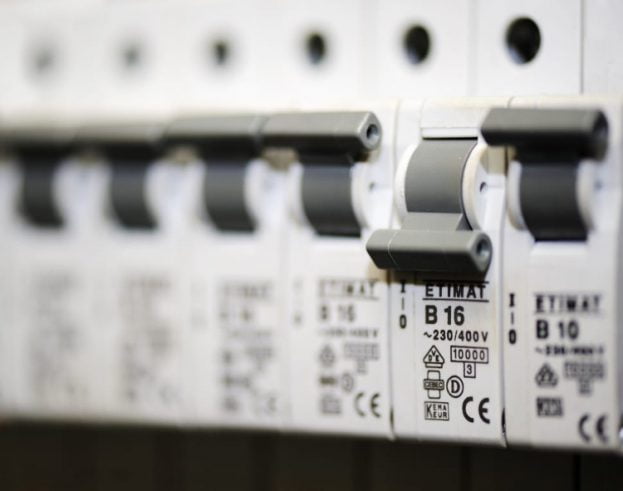 Why Do Circuit Breakers Trip?

Circuit breakers are a protective measure against damage to a circuit in the event of an electrical current overload. In other words, it makes sure that nothing breaks if you have too many appliances on at the same time and cause a short circuit.

The circuit breaker is an electrical switch that connects to your homes circuit board and interrupts the flow of electrical current if it detects a fault. In the event of a fault, the breaker switch will automatically stop the electricity from flowing through the circuit.

Circuit breakers are designed to ensure that a short circuit does not cause damage to the home or building. Before circuit breakers, in the event of a power surge, you had to replace a blown fuse.

Fuses also protected against electrical fires but only once and then you had to replace the blown fuse. With a circuit breaker once you correct the issue that caused the power surge or fault yo can flip the circuit breaker switch back to the “on” position.

How Does a Circuit Breaker Work?

Different types of circuit breakers can vary slightly but all circuit breakers are designed to perform a specific function. There are other things that can affect a breakers operation including the voltage class and current rating specifications. A circuit breaker detects faults in the current flow of a circuit and interrupts the circuits’ power delivery when a fault is present. When an electric current passes through two contacts it takes considerable force to separate the connection which is why a circuit must be broken by force in order to stop the transfer of electricity.

The low-voltage circuit breakers in your homes electrical panel are the simplest kinds of breakers. They use the stored energy in the spring to throw the switch and separate contact with the circuit when a fault is present. This allows you to manually turn off or reset the flow of power with the flip of a switch.

The contacts inside the circuit breaker contacts actually carry the electricity. They must deliver the load without overheating from a power surge or arc. Too much current or heat triggers fault parameters and then causes the breaker to trip. An arc happens when the current delivery is interrupted when the breaker trips. An arc is extremely hot and erodes the contact material in the circuit. When the contacts experience a fault the connection must be broken which is where the term “breaker” comes from.

The circuit contacts are made out of highly conductive metals, like copper and silver alloy. The higher the voltage, the longer the arc created when the connection is interrupted. The stronger the current, the hotter the arc is when the breaker trips. Circuit breakers and circuits are matched so they do not exceed the acceptable current and voltage fault parameters. The breaker switch interrupts the electrical connection if the contacts are experiencing an excess of heat or current flow. As soon as the fault is perceived, the breaker trips. To restore current flow the interrupted contact must be closed by resetting the breaker switch.

What Causes A Circuit Breaker To Trip?

Overloaded Circuit: An overloaded circuit is the most common reason for a circuit breaker tripping. It occurs when a circuit is attempting to draw a greater electrical load than it is intended to carry. When too many appliances or light fixtures are operating at the same time, the internal sensing mechanism in the circuit breaker heats up, and the breaker “trips,” usually by means of a spring-loaded component within the breaker. This breaks the continuous pathway of the breaker and renders the circuit inactive. The circuit remains dead until the breaker lever is reset to the ON position, which also re-arms the internal spring mechanism.

The circuit breaker or fuse is sized to match the load-carrying capacity of the wires in that circuit. Hence, the breaker or fuse is intended to trip or blow before the circuit wires can heat to a dangerous level. When a circuit breaker regularly trips or a fuse repeatedly blows, it is a sign that you are making excessive demands on the circuit and need to move some appliances and devices to other circuits. Or, it may indicate that your house has too few circuits and is in need of a service upgrade.

Short Circuits: Another common reason why circuit breakers trip is a short circuit, which is more dangerous than an overloaded circuit. A short circuit is caused when a “hot” wire comes into contact with a “neutral wire” in one of your electrical outlets. Whenever this happens, a large amount of current will flow through the circuit, creating more heat than what the circuit can handle. When this happens the breaker will trip, shutting off the circuit to prevent dangerous events such as a fire.Short circuits could occur for a number of reasons such as faulty wiring or a loose connection You can identify a short circuit by a burning smell that is usually left around the breaker. Additionally, you may also notice a brown or black discoloration around it.

Ground Fault Surges: Ground fault surges are similar to short circuits. They occur when a hot wire touches a ground wire that is made of bare copper or the side of a metal outlet box which is connected to the ground wire. This will cause more electricity to pass through it which the circuit cannot handle. The breaker trips in order to protect the circuit and appliances from overheating or from potential fires. If ground fault surges occur, you can identify them through a discoloration around your outlet.If you avoid or overlook any of these problems, you are putting the safety of your home and loved ones at great risk. If you experience tripping of the circuit breakers quite frequently, it is time to call in the professionals to investigate the problem. Do not try to handle this issue on your own.

ARC Fault: In recent years, the National Electrical Code, the model code on which most local electrical codes are based, has gradually increased requirements for a special type of circuit breaker, known as an arc-fault circuit interrupter (AFCI).

AFCI breakers, in addition to tripping due to overloads, short circuits, and ground-faults, also sense the power fluctuations that occur when sparking (“arcing”) occurs between contact points in a wire connection. This may occur, for example, because of loose screw terminal connections in a switch or outlet. An AFCI breaker, in other words, senses early wiring problems before they can lead to short circuits or ground faults. Neither ordinary circuit breakers nor fuses offer any protection against arc faults. Arc fault protection is an important safeguard against fires caused by arcing.

Older Circuit Breaker: Breakers can become more sensitive as they age. An overly sensitive circuit breaker can trip even when the wires are not overloaded with too much amperage.

A corroded breaker can also can trip when it should not. This is a more common issue in extremely humid climates like Hawaii or Florida.

So What Should You Do?

If you ever find yourself in a situation where you are experiencing issues with your electrical system you need expert assistance. You can always trust the pros at DOC Electrical Services to diagnose and repair your system quickly and correctly.

A large part of an electrician’s value is that he/she gets the job done right and safely without taking too much of your time and inconveniencing you. A very competent electrician can save you money by suggesting more efficient ways to do a job or to save on electricity. When you enjoy a good relationship with your electrician, it can save you both time and money. Give us a call about your next electrical project and we will be happy to help.

5 thoughts on “Why Do Circuit Breakers Trip?”