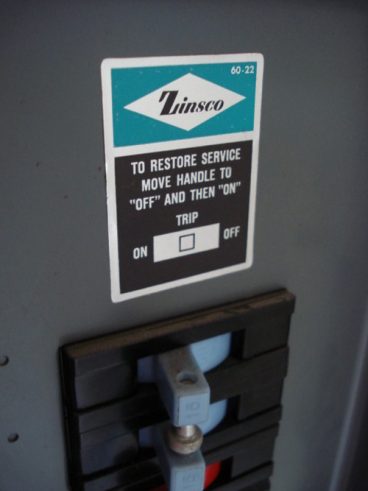 Many of the older homes have unsafe electrical panels. One of the most important components in your home is the circuit breaker panel. If your panel does not have a minimum of 100 amps of electrical service, you need to have an inspection performed by a licensed electrician. Your electrical system must be properly maintained to ensure everyone in the house remains safe.

There are two specific circuit breaker panels commonly used between 1950 and 1990 with dangerous design flaws. These are Federal Pacific Electric and Zinsco Panels with Stab-Loc circuit breakers. These panels can work properly for many years. If you have a short circuit or over-current, the panel can overheat and cause a fire.

The Federal Pacific Electric or FPE Panel was extremely popular within the United States. This panel was installed into millions of older homes. This panel is unsafe because you circuit breakers will not trip when they are supposed to such as for a circuit overload or a short circuit. This has resulted in thousands of fires all over the United States.

According to numerous reports, even if your FPE Panel is in the off position, power is still being sent to the circuit. Even if your circuit is off, you can be electrocuted if you attempt to work on the circuit. If your home was constructed between 1950 and 1980, you may have an FPE panel. Look at the cover of your breaker box for the words Federal Pacific Electric.

The circuit breakers for this panel were manufactured under Stab-Loc, the brand name. This name is on the inside of Federal Pacific Electric breaker boxes.

The Zinsco Panel was very popular during the 1970s. Although Zinsco no longer exists, this panel is still in numerous homes. The circuit breakers of this panel often melt. This prevents the breaker from tripping if there is an overloaded circuit or a short. If you have an electrical issue, the power can result in a fire due to the melted wires.

If the name Zinsco is on your panel, you need to have it replaced. The Zinsco Panel was re-branded as Sylvania or GTE-Sylvania. These panels have the same safety issues and need to be replaced.

During the past fifty years, electrical loads for the average home have substantially increased. This occurred for many reasons including computers, gaming systems, multiple televisions and cell phones. All of the devices use electricity. The United States Census Bureau has stated over fifty percent of all homes in the United States were built prior to 1970. This was before these devices were invented.

A 60 amp two-wire service prior to 1970 was common. The current minimum is a 100 amp three-wire service. The correct service is dependent on the electrical load of your home. You may need as many as 200 amps. Until you update your home’s electrical system, it will remain outdated and a potential threat to your safety.

According to experts, both Zinsco and FPE breaker panels present a danger for injury, electrical shock and fire. The reasons these panels are dangerous include:

There are potential issues with the breakers in FPA panels including:

• Loose connections
• When in the down or off position, the panels may be active
• Overcrowding
• They split easily

The (CPSC) Consumer Product Safety Commission determined the materials used for these breakers are often weak during UL 289 testing conditions. This means your panel can start a fire if your breakers do not trip. Malfunctions with the FPA panels breakers are responsible for approximately 2,800 fires every year. The fact Federal Pacific Electric is now out of business does not stop the damages and dangers resulting from their negligence.

Electricians have been unable to remove the breakers because they melted together. This will prevent your breaker from tripping. The amount of electricity flowing into your home may then become unsafe. This is what has started so many fires. Another serious issue is the breakers blowing out. This results in an electrical arc explosion.

Even if your panel looks like it has been shut off, it may still conduct electricity. This presents a significant risk for electrocution or a severe electrical shock. These panels should only be removed and inspected by a licensed electrician. Your entire panel must be replaced as opposed to your damaged circuit breakers.